The United States has a military unlike any other. Specifically, we are fortunate enough to have a maritime tour de force. As such, the Marine Corps and Navy often times operate hand in hand. Consequently, one of the many things that we use in conjunction with the Navy is their terminology. 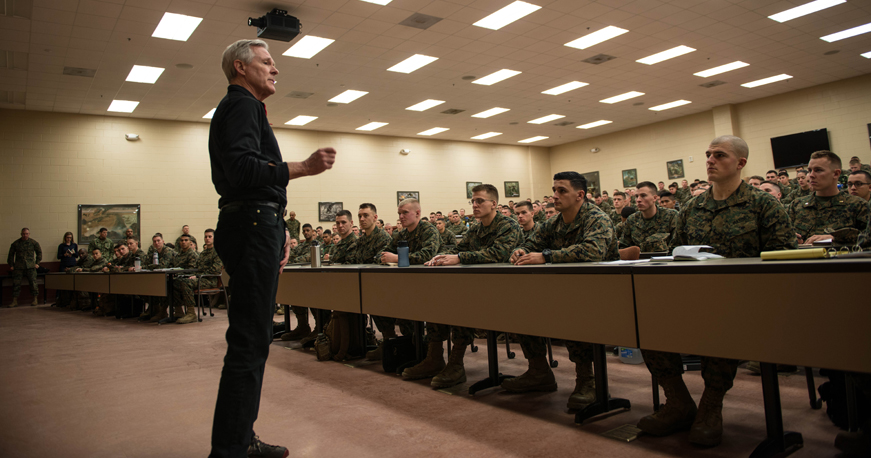 Secretary of the Navy Ray Mabus speaks to a classroom of Marine Corps officers at The Basic School about the future of the Marine Corps during his visit to Marine Corps Base Quantico, Virginia, January 27, 2016.
—(USMC photo by Sergeant Cuong Le).


The Marine Corps has a rich and proud tradition. The countless battle streamers earned by each individual unit is a testament to this fact. There are many things that the Marines do that set them apart from the other branches of service. However, the Marine Corps has always had a long standing history with the U.S. Navy. This is to be expected, considering that the Marine Corps falls under the Department of the Navy. The United States has a military unlike any other. Specifically, we are fortunate enough to have a maritime tour de force. As such, the Marine Corps and Navy often times operate hand in hand. Consequently, one of the many things that we use in conjunction with the Navy is their terminology.

Much of the language that you might hear a Marine use is based upon terms you'd associate with a ship. For example, even when on land, Marines refer to a wall as a bulkhead. While some of the usage has undoubtedly faded away over the course of time, this tradition is still quite prevalent in boot camp. Recruits refer to windows as portholes, acknowledge orders with an "aye aye", and refer to the restroom as the "head" among other things. So why exactly do Marines use this terminology? As previously mentioned, much of it has to do with tradition. However, commonality while on ship is another big factor. While recent conflicts have taken away much of the need for Marines to utilize ships, there is always a Marine unit on rotation with a Marine Expeditionary Unit (MEU). A MEU is simply a quick reactionary force stationed aboard ship that can quickly respond to a crisis. As such, it's important for Marines to understand the language spoken aboard ship.

While language is always changing in the civilian world, the basic tenants of naval terminology seldom change. This can be comforting, considering that Marines and sailors of different generations are linked not only by their service, but by their words.

ABOARD: On base; with us.

ALL HANDS: All members of a command. Everyone.

AO: Area of operations, similar in definition to TAOR discussed below.

ASHORE: Any place outside of a naval or Marine Corps installation

AS YOU WERE: Resume former activity

AYE-AYE: An acknowledgement of orders. This means that an individual understands and will comply with orders. Different than simply saying yes

BDA: Bomb Damage Assessment - given to fixed wing pilot by airborne AO at end of air to ground support mission.

BELAY: To make fast or secure, as in "belay the line"

BELAY THAT: Cancel or disregard the previous statement or order

BIVOUAC: A camp in the field

BLT: Battalion Landing Team, a US Marine infantry battalion specifically task organized and equipped to conduct amphibious or helicopter-borne landings from the sea.

BOOT: A brand new Marine, or "Boot Mistake" is like saying a "Rookie Mistake"

BREAKOUT: Take out of stock or storage. Prepare for use

BRIG: A place of confinement. A prison

BUTTERBAR: A second Lieutenant. Refers to the gold rank insignia

CARRY ON!: Resume what you were doing; as you were.

CH-37C: Powered with twin reciprocating engines, this heavy helicopter operated on a limited basis in the early years of the war, mainly for the retrieval of downed aircraft.

CH-46A, CH-46D: A twin gas turbine powered medium helicopter that replaced the UH-34D for troop and cargo lift, medevac, and other assigned missions.

CH-53A, CH-53D: A twin gas turbine powered heavy helicopter that replaced the CH-37C for the retrieval of downed aircraft, as well as the movement of heavy and large items of equipment such as trucks and artillery. The CH-53D was the improved version with more powerful engines.

COLORS: (noun) The flag. (verb) Ceremony of raising or lowering the flag.

COM-RATS: Commuted rations; in lieu pay for meals eaten off base.

CP: Command Post, the location from which the CO commanded his unit. This could range from an extensive permanent building complex to a hole in the ground.

DEPLOYMENT: Temporarily moved from the permanent duty station, generally to an overseas location or on a ship.

DMZ: The Demilitarized Zone separating North and South Viet Nam that was established by the United Nations at the time French IndoChina was partitioned into the two countries. It was generally ignored by both sides during the war.

DOUBLE TIME: Quickly, at a run.

EAGLE FLIGHT: (also PACIFIER, KINGFISHER, SPARROWHAWK) A package of aircraft, on either ground or airborne alert, designated to respond to emergency situations or targets of opportunity by either inserting ground units or attacking by fire or both. The group usually consisted of a command helicopter, troop lift helicopters and attack helicopters. In some instances, fixed wing attack aircraft were also added to the package.

FAC: Forward Air Controller - usually a pilot assigned to a ground unit for air-to-ground liaison between aviation and ground units.

FIRE IN THE HOLE!: Warning that explosives are about to be detonated.

GANG WAY!: Stand back! Move away!

GIZMO: Gadget. Anything that defies discription.

GUARD Channel: The universal radio channel monitored by all aircraft on which emergency transmissions and requests for assistance are made.

HARDHAT: An acronym for the aircrew member's protective helmet.

HIGH-SPEED, LOW-DRAG: This term typically means something is new or cool

HOOCH: Any kind of shelter, residence.

HUMP: To march, to carry, to be burdened with.

IFR: Instrument Flight Rules, a condition during which a pilot is flying in the clouds on instruments, and without reference to either the natural horizon or the ground.

JUNK-ON-THE-BUNK: Complete clothing and equipment inspection (also Things-on-the-Springs) laid out on the rack.

LOCK AND LOAD: Arm and ready your weapon; get ready!

LPD: Landing Platform Dock, a Navy amphibious ship, capable of supporting and operating a small number of helicopters for an extended period of time. Usually, 4 to 6 on board with 2 being operated simultaneously.

LPH: Landing Platform Helicopter, a Navy amphibious ship, capable of supporting and operating a squadron of helicopters for an extended period of time, and capable of transporting and off-loading a battalion of Marines at the same time.

LZ: Landing Zone, an unimproved site where helicopters landed in the performance of their assigned mission.

MAB: Marine Amphibious Brigade, a temporary headquarters superimposed over such amphibious units as a Regimental Landing Team and a Provisional Marine Aircraft Group. The MAB was identical in mission and structure to the Marine Expeditionary Brigade (MEB.)

MAG: Marine Aircraft Group, the unit immediately superior to aircraft squadrons, A helicopter MAG typically would have the following squadrons: 3 HMMs, I HML, I HMH, 1 H&MS, and I MABS attached.

MAKE A HOLE!: Stand back! Gang-way!

MEB: Marine Expeditionary Brigade, identical to the MAB discussed above.

NON-QUAL: Marine who fails to fire a qualifying score at the rifle range.

OVER THE HUMP: More than halfway through enlistment.

PDS: Permanent Duty Station; The Rear Party is generally a small number of Marines that stay "in country" for a longer period of time than the majority of the battalion. The Rear Party functions as the element to finalize the location after the battalion departs.

POG: Personnel Other than Grunt

POLICE CALL: Time allocated to clean up an area.

PROVMAG: Provisional Marine Aircraft Group, a temporary group organized for a limited period of time to meet a specific tactical or operational need.

QEC: Quick Engine Change, an expedient procedure developed to quickly change the engine of a downed helicopter in the field.

QUARTERDECK: Technically an upper deck on a ship that is used by officers; specifically for ceremonial use. This term is used to signify an area of a squad bay where recruits undergo IT (incentive training)

RAPPEL: Descend from cliff or helicopter by rope.

RBE: Remain Behind Element, is a small number of Marines from the deployed unit that stay at the permanent duty station during deployment. The RBE functions include communications with family members and maintaining the unit's affairs at its main base.

RIVER CITY: A slang term used by Marines to refer to a situation when the unit's communication systems are temporarily shut down. This could occur to preserve operations security before a maneuver or if a unit sustains casualties to ensure family members are notified through the proper channels.

ROUND: Bullet or artillery or mortar shell.

RLT: Regimental Landing Team, a US Marine infantry regiment specifically task organized and equipped to conduct amphibious or helicopter-borne landings from the sea.

SCUTTLEBUTT:Can either mean a water fountain or the "rumor mill", etymology most likely comes from rumors beginning around water coolers.

SEA DUTY: Billited aboard a ship.

SECURE: Tie down or make fast; also to recycle or dispose of; to put something in its proper place; to desist.

SHIT CAN: (verb) To dispose of. (noun) Garbage can.

SHORT ROUND: Ordnance which is landing short of the intended target.

SHORTTIMER: Marine nearing the end of an enlistment period.

SNAP IN: Practice, especially on the rifle range.

STACK ARMS!: Command given to place 3 rifles in a pyramid.

TAC(A): Tactical Air Controller (Airborne) - either a qualified pilot or a qualified Aerial Observer who is responsible for the safe conduct of air-to-ground strikes, artillery strikes or naval gunfire missions.

UA: Unauthorized Absence, both a disciplinary term, and an acronym for anything or person not in the place it is expected to be.

XO: Executive Officer, the second in command of a unit.

PLEASE NOTE: During the COVID-19 Pandemic, there are temporary changes in the information we provide on our informational website for each stage of your Marine or Recruit's career in the corps. To learn more, visit MarineParents.com/COVID19